Akiko wrote about a trip she took to Hiroshima last October

March 09, 2020
I stayed ANA hotel Hiroshima last October. There is in Hiroshima city.  My husband and I took the tour. It was the fee including ticket and staying the hotel. It was a low price.
We enjoyed 3 days at this hotel. The hotel is near the Hiroshima station and clean and comfortable.  I saw many foreign people stayed there. They came to watch the World Cup Rugby.
We went to another place by train. We went to The Atomic Bomb Dome and Itukushima shrine. Other places are World Heritage. I visited another one was Hiroshima castle.
The Atomic Bomb Dome is still remained as it was broken. The museum has many burned clothes, lunchboxes and many real photos.  The exhibition is serious and terrible facts. I am  moved there and I agreed "No More Hiroshima".
Itukushima shrine was built near the beach in the 9th Century. When the high tide come to its foundation of 'torii' and the shrine building as flooded during the high tide . It is beautiful and fantastic scenery. We most Japanese think a heavenly scenery.
In reality, the tour was cheap but I got valuable trip.
by Akiko. 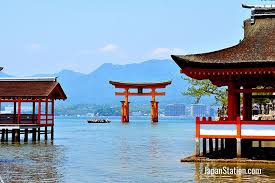 Popular posts from this blog

January 10, 2022
Happy 2022 We are now open and starting the new year with new courses. Take a look and let us know what you would like to enrol in.
Post a Comment
Read more
December 17, 2021
We had a lovely visit from Byung Sook Gong this week. She had been a student here earlier in the year. She was a dedicated student and her English improved a lot. Just shows you are never too old to learn something new.  It was lovely catching up with her and her family, we miss her.
Post a Comment
Read more